AWAKENING TO WILDNESS, ONE WITH NATURE, Part 2

What is your relationship to nature?  Are you a hiker, fisherman, gardener?  What part of you comes alive when you are in touch with nature?

The Soul Is Wild

“The soul is like a wild animal – tough, resilient, savvy, self-sufficient, and yet exceedingly shy.  If we want to see a wild animal, the last thing we should do is to go crashing through the woods, shouting for the creature to come out.  But if we are willing to walk quietly into the woods and sit silently for an hour or two at the base of a tree, the creature we are waiting for may well emerge, and out of the corner of an eye we will catch a glimpse of the precious wildness we seek.”  Parker Palmer

What is it about wildness that touches so many of us deeply?  For my friend Jerry, it is nature’s inability to be domesticated.  Even at four years of age, he was allowed to go into the forest where he created fantasy games, often related to the stories he was reading.  The woods were his playground.  As a young man, he ran a program similar to Outward Bound.  He was a woodsman first and later became a psychologist.

Wildness Is Central To Spirituality

Jerry often quotes William Blake or Thoreau, both writers who embody wildness.  When I asked him how wildness relates to his spirituality, he said, “It is central to it.  I’m part of the natural—part and parcel of the fauna—I’m not outside looking in.  I can’t think of spirituality without wildness.  I’m not sure I could be wild if I lived in the city all the time because that environment is so domesticated.”

The Space With No Name

During my twenties, I was enthralled with the Romanic writers, the transcendentalists like Emerson and Thoreau, who saw a deep, but wild connection between nature and spirituality.  So, when I was first invited to visit Jerry’s “Space With No Name,” I was truly awed by its natural beauty and felt as if I had stepped into another world.

After Jerry and his wife Jane moved to their cabin in the woods, he needed a space to put his parents who had passed away and been buried on someone else’s land.  After one plan fell through, he found a beautiful rhododendron area.  As he wandered through it, he thought, “This is not a graveyard, the old burial ground; this is a wilderness space that will sanctify my parents.”

Gathering wood off the ground, he created a little container and using the 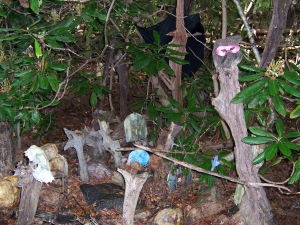 contours of the hill as paths, he created this special space.  He put creatures on the fence posts and before long, he says, “The space over ran itself.” Every day he walked the paths, very attentive to what was there, then the next day in the very space that had been empty, a creature would appear—branches with knarled ends or pine knots, stumps with interesting configurations, or rocks with faces.  Things began to show up on their own, and he swears they also moved around, sometimes falling off perches or appearing mysteriously in new places. He insists, “I swear, it became alive.”

I have no doubt this is a sacred space.  The last time I was there, I glanced toward a small metal sculpture of a dancing earth mother and was stunned by what I saw next to it.  In the same area was a knarled wooden creature that looked like a samurai warrior that had once appeared in a vision I had while meditating.  For a moment, all time and space was one, and my unconscious become conscious—which is what this space does to one.

In “The Space With No Name” there are around a thousand creatures, natural and ones created from several natural forms.  I asked Jerry, “Aren’t these composite creatures art?”

“I don’t want to claim it as art,” he said.  “It’s fine with me if people say, ‘You’re not a caretaker, you’re an artist.  It may be one and the same thing.  I was never a painter, poet, or composer.  I didn’t and don’t do Art, yet living so close to Art, I recognize and appreciate her presence, practice, and performance, and her Wildness, and She has surprised me with a gift of animistic sensibility in the “Space With No Name,” where I am in close communion with the living, breathing woods and hundreds of wild creatures, including rocks, roots, stumps, pine knots.  There are hawks, bugs and birds; trees, red fox, wild turkey, bob cat, bear, raccoons and possum; stealthy presence of coyotes.  Neither owner nor creator of this space, I am lucky to be its caretaker.

Being One With All That Is

His animism permeates Jerry’s whole life.  “This rock, in my space, that I sit on has an eternity I don’t have.  I wouldn’t take all this as seriously as I do if I weren’t animistic.  I’d say, ‘That’s just a tree stump.’  But it’s so much more.  One day, Jane was working on a sculpture, a mask.  I was walking around and saw something sticking out of a tree stump.  I was curious so I pulled it out—it looked like a mask.”  He pointed to the mask-like image sitting on the tree stump in front of us.  When we are in touch with our core of wildness and Oneness, these things often happen.

As I listened to Jerry, I realized his relationship to nature exemplifies Oneness.  We are all a part of Oneness—one with each other, nature, and the Universe, but we are not all conscious of it.  It is only when we become aware of it, that it enriches our lives. The wildness of Oneness is at the core of what Jerry experiences each day when he enters the “Space With No Name.”  He is truly blessed by that experience, and I am truly blessed to know him and his wife Jane who shares his sensibilities.

What part of yourself do you find in nature?

2 responses to “AWAKENING TO WILDNESS, ONE WITH NATURE, Part 2”